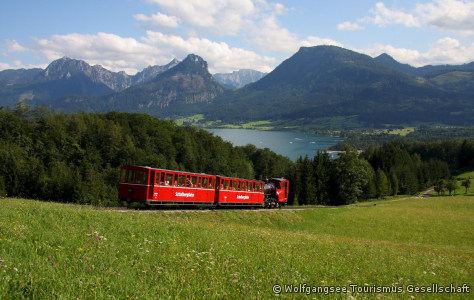 In St. Wolfgang you can ride to the summit of the Schafberg mountain at 1783m above sea level in just 45 minutes by means of the steam cog-railway. In clear weather you have a fantastic panoramic view over the many lakes of the Salzkammergut. 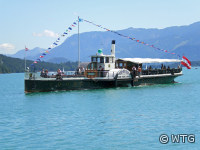 Since imperial times there have been boats on Lake Wolfgang. In 1873 the paddle steamer “Franz Josef I” was launched and since then the nostalgic boat sails between St. Gilgen, St. Wolfgang and Strobl and is the attraction of the fleet. Of the further five cruisers, the flag boat “Wolfgang Amadeus” is the most popular.

With a boat you are very close to the charming area around Lake Wolfgang: St. Gilgen and the birth house of Mozart´s mother, St. Wolfgang with the “White Horse Inn” and the Schafberg cog railway and many more well-known places. It´s a special trip.

Excursions in the region

Free for you from 3 nights!
130 attractions in Salzkammergut up to 30% cheaper.